In: Thailand
With: 0 Comments

Where is the Sukhothai Historical Park? Why visit it?
When is the best time to go?
Things to do in Sukhothai
Accommodation
How to get to Sukhothai National Park?
Map of Sukhothai
My experience
[Updated 2019]

Where is the Sukhothai Historical Park? Why visit it?

This park is located 247 km north of Bangkok, near New Sukhothai city. Here is located one of the most important archaeological site in Thailand. Its ruins are UNESCO declared World Heritage Site and its history is tightly bound with the Ayutthaya Kingdom. The name Sukhothai means literally ‘Dawn of Happiness’. It’s a place to go back to the past and imagine how life was in the golden city, where the king Ramkhamhaeng [reign 1279–1299] developed the first thai writing.

When is the best time to go?

The cooler climate is from November to February, it’s the high season. Since March to May is warm and the rest of the year is the monsoon/raining season.

If you want to go an special day, you should visit the park during the Loy Krathong Festival, those days coincide with the first full moon of November. You’ll enjoy the fireworks, traditional dances and spectacles of musics and lights.

Things to do in Sukhothai

The main attraction of Sukhothai are the ruins although you can also visit a few museums, a temple and others places in the province:

The most important ruins are (you can see the location on my map below): 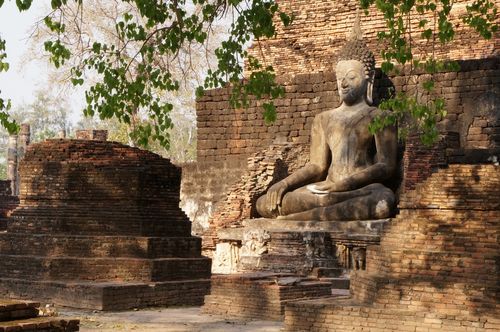 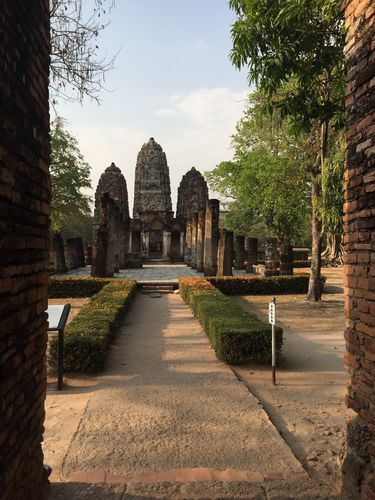 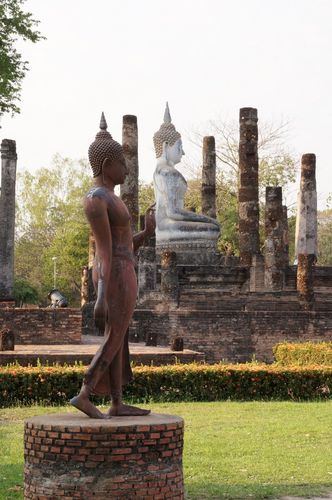 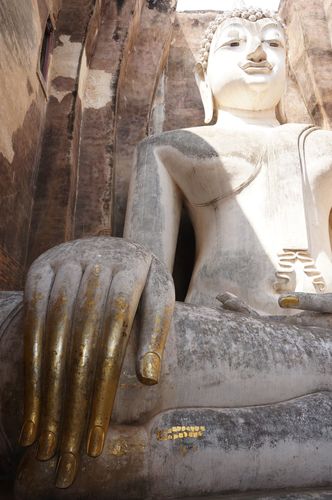 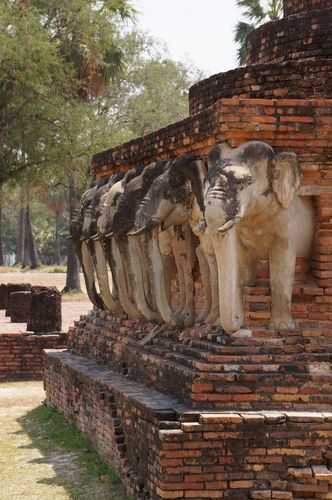 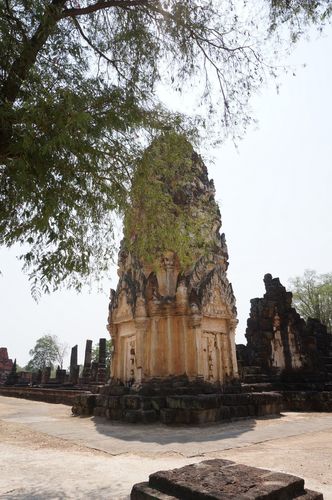 – West Zone: Wat Saphan Hin. On the way is the Wat Chedi Ngarm, although it isn’t a must-visit. 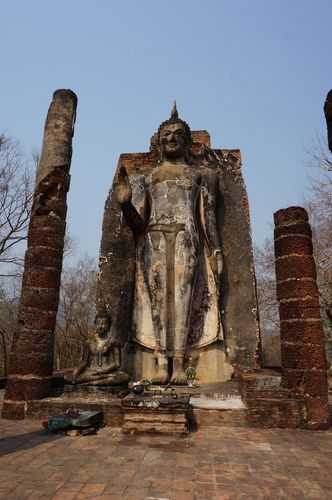 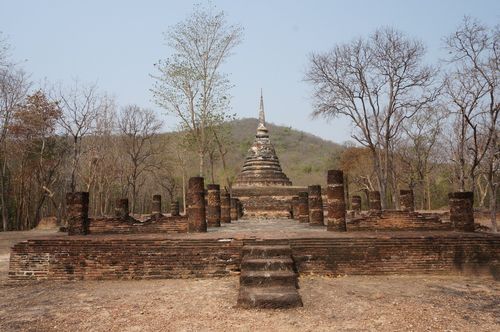 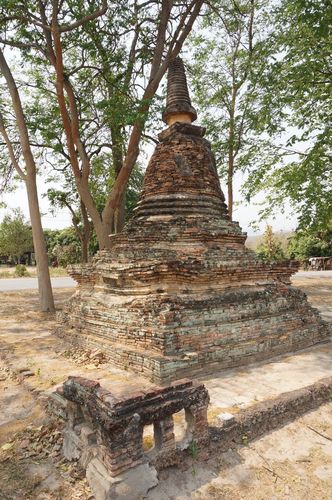 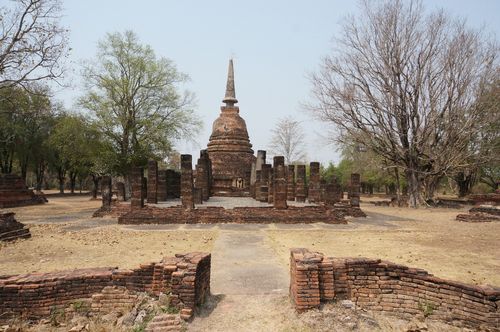 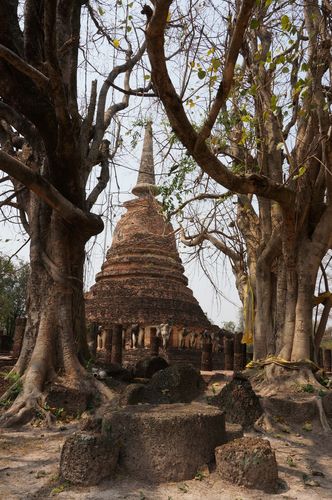 How to go over all ruins?

The cheapest and most enjoyable way is by bike, renting one costs about 50 THB. Although if the temperature is high for you it can be a torture to get to Wat Saphan Hin, but it isn’t impossible. Other option is renting a motorbike for 200/300 THB or hiring a tuk tuk for 200THB (2h) or 500THB (4h). These prices are from 2016.

Close to the central zone. It contains a big collection objects of Sukhothai and of Si Satchanalai, as well as a copy of the inscription of Ramkhamhaeng which is considered the first example of thai writing. On tripadvisor-opinions you can read about what to expect of this museum.

It’s an active temple next to the museum that I’ve mentioned before. It’s surrounded by a pond. You can walk around the area and see the old Stupa. Free entrance. 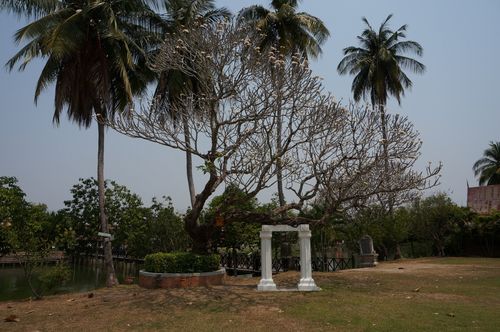 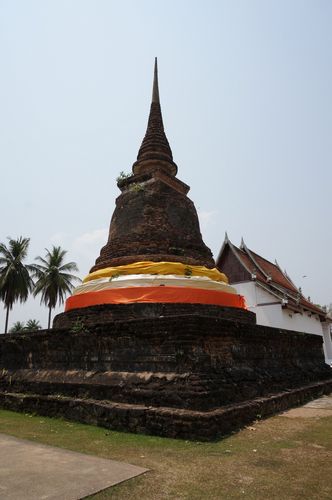 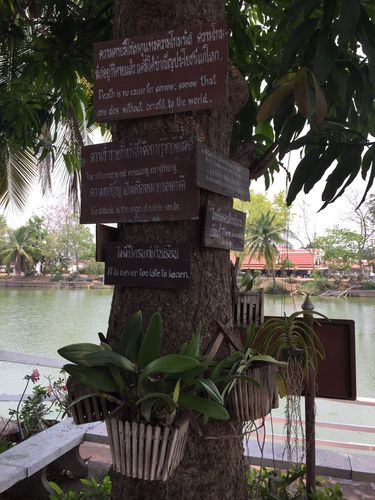 It’s located 2’5 km of New Sukhothai. The most complete collection of porcelain of Sangkhalok is here, a type of porcelain produced during the Sukhothai Kingdom. If you are not sure about adding it to your plan maybe these opinions help you to decide.

5. Also you can explore the surrounding area of Sukhothai where it’s located the National Park of Ramkhamhaeng or the Si Satchanalai Historical Park.

You can check all the locations on my map.

Attention! Visual spoiler: just as it happens with Ayutthaya, you can also visit the ruins of Sukhothai or Si Satchanalai through street view on google maps.

There are two zones where you can stay: the vicinity of the historical park or at New Sukhothai. Both have good offers ‘3B’ (which in spanish means: ‘Buenas, Bonitas y Baratas’ and in english would it be: good, beautiful and cheap).We stayed in Thai Thai Sukhothai Guesthouse. It’s near the park entrance so we could do a bike route around the temples. It was a good choice because of the location, the price, the kindness of the receptionist and its comfort.

You keep in mind that you need a transport from New Sukhothai to the historical park, it takes 30 minutes. Although if you’re going to stay several days because you want to visit Si Satchanalai this place can be better option.

About the restaurants there are largest selection in New Sukhothai and besides a night market where ‘street food’ is served. Close to the historical park there are nice places to eat (check my map).

How to get to Sukhothai National Park?

If you go there from Bangkok the easier and faster way is by airplane. It takes 1 hour and there are two flights daily, one in the morning and another in the afternoon with the company Bangkok Airlines. It’s worth to take a flight just to see the peculiar and original airport of Sukhothai. When you land on the airport you’ll see an information stand, they offer the transport to New Sukhothai, to the Historical Park, to your hotel… in a van (obviously this isn’t included in the flight ticket, if you go to the area of the historical park the price is about 300 THB per person, if you go to the city center costs 180 THB). These prices are from 2016.

It is possible to get to New Sukhothai by bus or van from differents cities: Bangkok, Chiang Mai, Chiang Rai, Khon Kaen, KamphaengPhet, Lampang Mae Sot, Nan, Si Satchanalai, Phitsanulok, Sawankalok…then from there you need another transport to get to the historical park.

In the next map you can see all the places I’ve mentioned: ruins classified by areas, the restaurants where we ate, our hotel and the rests of important places.

March/April 2016
We were 1 day and a half visiting the historic park, it’s enough time to see everything with no hurry. The temperature was very warm: 37º, it was normal by the end of march. Even so, we were feeling brave and we rented bikes in our accommodation. Immediately after we went to buy litres and litres of water.

The first day we visited the central and north area, we explored all we saw on the way. You can get in and out all the times you want during one day with the ticket. The last stop was in the central area, where they recommended us watching the sunset. It’s very beautiful to see how the sun fall behind the Wat Mahathat. 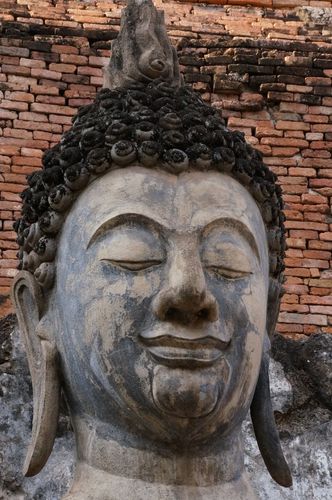 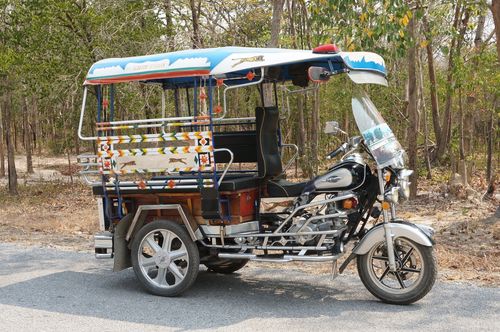 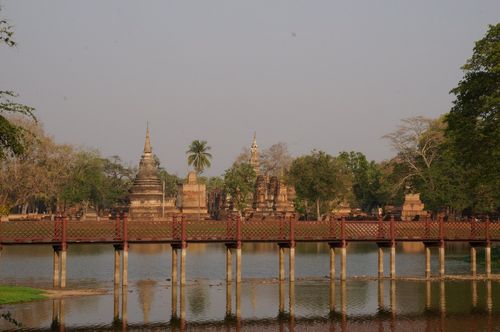 The second day, although we had energy to continue by bike, we decided to rent a tuk tuk during two hours to go to the west area and to the rest of the ruins (south and east) because they are far away and maybe we would not have had time to see them by bike. It was a great decision, it made us happier when we saw some cyclists suffering to get to Wat Saphan Hin (it’s in a small hill). After that, we visited the Wat Trapang Thong Temple.

Something I want to underline was the information that the hotel gave us, several pages with: the best restaurants, maps of the ruins and descriptions, price and details about transport to differents places, price of tuk tuk… Really useful information.
We tried the three first restaurants recommended by the hotel, two of them on tripadvisor as well. They were very good, with tasty thai food, air conditioned and fruit shakes (vital to stand the heat). You can find them on my map.

We arrived and left Sukhothai by airplane. We asked for the van to go to the airport in our hotel and it costed the same as when we arrived.

Any contribution or question is welcome, please write a comment!

This site uses Akismet to reduce spam. Learn how your comment data is processed.